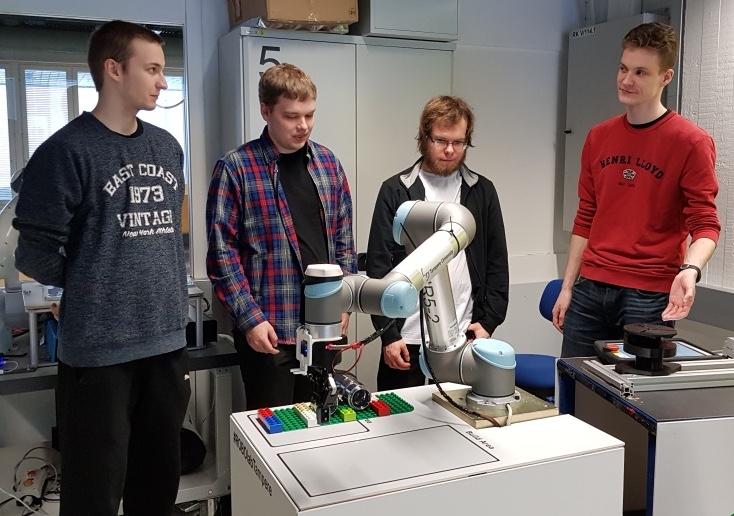 Last autumn, a group of MSc Robotics students at Tampere University started a project to investigate the deployment of robot systems in Tasowheel’s production. Originally, the idea stemmed from Tasowheel CEO Jarmo Kuikka, who wanted to learn more about collaborative robots and their integration into Tasowheel’s existing production environment. An in-house research was already being made about the grippers of robots, but more data was needed about portable robot systems.

Eetu Piki was responsible for the cooperation in the students’ project group.

At first, we made an excursion to Tasowheel in order to observe their production facilities, that is, the future working environment of the robot, and the machines that it was supposed to work at, Eetu reports.

After the excursion, in the first phase of design and planning, the students mapped out the resources available in the test lab of their university.

Actually, this involved two projects, as we first created a demonstration as close as possible to the real-life factory environment, and then we designed the best possible robot system for Tasowheel’s needs.

At Tasowheel, the new robot is needed to support in automating automation and to manage monotonous pick-and-place tasks that have previously required manual work. The robot will pick unprocessed blank products from a pallet and place them to the conveyor, which will then pick and place them for machining. Once the machine cycle is completed, the robot will remove the completed parts from the belt for further transport.

During the research project, the students quickly found out that the demo robot of the university would not qualify in Tasowheel production due to its insufficient payload capacity. So they mapped all collaborative robots, that is, cobots in the market and listed those that would best meet the requirements set by the actual production environment and the most critical attribute: safety.

Safety is the number one issue in the production environment. The robot must be designed to remain safe while interacting with humans. It has to stop when needed without causing any danger, Eetu says.

In addition to the tight safety requirements, also other restrictions decreased the amount of suitable cobot candidates.

At Tasowheel, the objects that are being lifted and moved are rather heavy. Regular cobots with a payload of a maximum 7-8 kg come not in question.

Jarmo thanks the research group for making excellent remarks and concrete recommendations and shedding more light on safety.

Although the collaborative robot itself is not dangerous, we learned that a safety risk may appear when it moves a two-kilogram, sharp-edged gear. Therefore, it is important to isolate a separate operative area for the robot, he explains.

The robot researchers themselves were surprised that there were no complete solutions for redeployable cobots that could be easily moved from one machining station to another. This raised their interest to do further research in mobile robot solutions. For Tasowheel, the most important takeaways involved safety and the challenges that may emerge in the deployment of robots.

This was an interesting and valuable project that gave us a lot of useful information. It was also made clear that it is not as simple to deploy cobots in production as the robot marketers may let you think, Jarmo sums up.