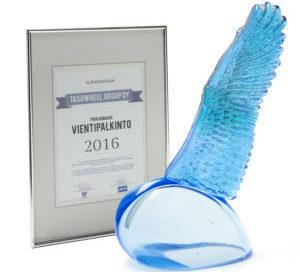 “This prize truly raises us to a prestigious list of winners”, said Mr Kari Sorjonen, Chairman of the Board, Tasowheel Group. ”We are clearly on the right path with our export-focused strategy, and we are constantly taking big strides forward. This prize belongs to all of our 120 employees.”